For this reason, I spent a good part of July analyzing the way in which performance scales with frequency and timings, in an attempt to help you get an accurate opinion about what kind of configuration is right for this platform. The results of these tests can be consulted here, in the first part of the scaling study, which I warmly recommend you to read if you have not already done so, because that is where I explained the most important elements of the memory / processor communication process.

However, even though we published one the largest AMD Ryzen 3000 RAM scaling studies, the results of this study were based on a single type of memory, you guessed it, equipped with Samsung B-Die ICs. Basically, using the same memory kit, we tried to analyze the impact that clocks, timings, synchronous and asynchronous operating modes have on the performance, running a large number of tests.

Thus, we found that in order to achieve maximum performance we must use a 1:1 configuration with the highest clocks possible, with tight timings. Obviously, in daily use, we will not lose too much performance if we use a DDR4 3600 16-16-16 or a DDR4 3200 14-14-14 memory kit, the biggest differences being encountered in AIDA, not in games or real-life applications. Of course, the maximum performance for the AMD Ryzen 9 3900X CPU is a 1:1 DDR4 3800 configuration with tight timings – 1900MHz fClk being the highest setting where our CPU is fully stable.

However, even though we tried to offer as much information as possible regarding this subject and we hope we helped you in choosing the right memory kit, it was clear that the first part of our study did not deal with all aspects of this issue, leaving a series of questions without answer. How do RAM kits equipped with other ICs behave? How does high density RAM behave? What happens if we use 4 memory sticks?

Well, as soon as we finished the first part of the scaling study, we started working on the second part. First, we tested Samsung B-Die dual-rank memory kits, as well as memory kits equipped with Hynix CJR ICs, respectively Micron E-Die ICs, and then we published individual reviews for each kit. Then, we tested the behavior of 4 memory kits equipped with Samsung B-Die ICs, and last but not least we used a high-end memory kit from GSkill in order to hit DDR4 4800.

What you see in this article is how I spent most of this summer, testing different RAM kits, along with AMD Ryzen 9 3900X and the excellent MSI X570 Godlike motherboard. Therefor, if in the first part we tried to see which clocks and timings combinations offer the best performance, today we will see if we can use cheaper RAM in order to achieve similar levels of performance with Samsung B-Die kits. Buckle up, because this is going to be a long ride. And, of course, please excuse my english, which is obviously not my native language. 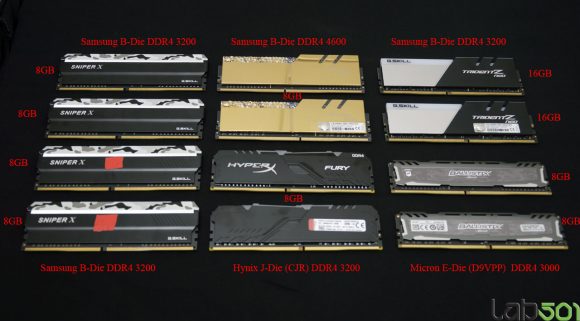