Hello… it’s me again… yes, the RAM guy. You remember, right? Back in July, AMD released the third Ryzen generation, together with a new chipset, X570, and a new way in which the memory, the integrated memory controller and the infinity fabric are connected. I tried to explain all that here, so if you did not take the time to read the first part of our DDR4 scaling study on AMD Ryzen 3000, now would be a good time to do it.

Basically, now we can set RAM in two different ways: synchronous (when the actual memory clock (mClk), the integrated memory controller, or in this case unified memory controller (uClk) and the infinity fabric (fClk) run at the same clock (1:1), or asynchronous, when uClk and fClk are half of mClk (1:2). The first type of usage gives us the lowest latency and overall highest performance, while the second type allows for very high memory clocks, which were impossible with previous Ryzen CPU’s.

We found this out by testing a 2 x 8GB Samsung B-Die kit in a bunch of benchmarks, real-life apps and games, and the biggest difference by far could be seen in AIDA Cache and Memory Benchmark, which is a dedicated bandwidth / latency benchmark. In the second part of our DDR4 scaling study on AMD Ryzen 3000 we saw how various IC’s (Samsung B-Die, Micron E-Die, Hynix CJR) and configurations (2 x 8GB B-Die, 2 x 16GB B-Die dual-rank, 4 x 8GB B-Die) behave, and we found out what RAM kit to choose for our AMD Ryzen 3000 platform, depending on our budget and expectations.

Again, if you haven’t read the first two parts, now it would be a good time to do it, in order to better understand what we will discuss today. And now that I mention that, after the first huge scaling test, followed but the battle of the IC’s, what do you think is there left to discuss?

Well, that is pretty simple actually. You see, we wanted to really grasp what the third generation AMD Ryzen is capable of, so we did all those tests on an AMD Ryzen 9 3900X CPU, together with the excellent MSI MEG X570 Godlike. And that helped us find out which memory configuration is best for the highest performance, when we are discussing the top of the line CPU, and one of the best X570 motherboards available on the market.

However, not all our readers can afford a Ryzen 9 3900X CPU, or even an X570 motherboard for that matter, and truth be told, not all our readers need that amount of processing power. And I think much more people currently enjoy the benefits brought by the much more affordable Ryzen 5 series, mainly Ryzen 5 3600 and Ryzen 3600X, and due to the fact that B550 is not here yet, many of those who choose an affordable AMD Ryzen 3000 CPU, are currently opting for a B450 motherboard, since X570 motherboards come with a hefty price tag.

So the logical step for me, after I spent most of July testing various B-Die settings on X570, and then most of my summer testing how different IC’s behave on the same platform, was to redo all the tests that I did in the second part, this time on a much more affordable platform. Call it… the DDR4 scaling test for the masses, if you will. And that, my dear friends, is what we will discuss today, in the third part of our AMD Ryzen 3000 DDR4 scaling study. 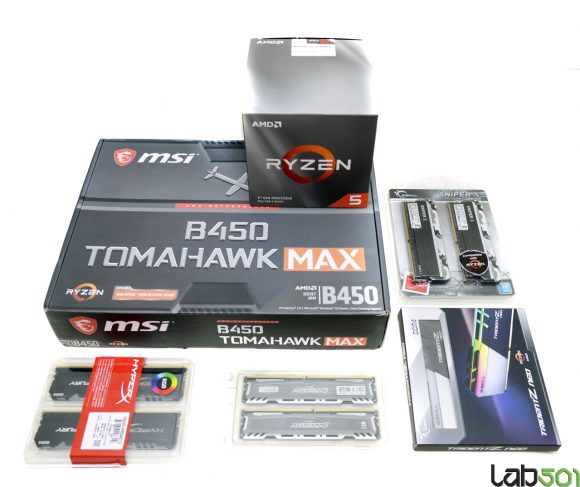