So even if that would have been the ideal case, due to various time limitations which I hope you will understand (I… kind of… enjoy having a wife, and a tiny bit of social life besides all this, and even if she is the most supportive person I’ve ever known, these kind of tests take quite some time, along with my daily testing and reviewing routine) I chose not to do those comparisons and jump to the scenario which makes most sense, which is Ryzen 5 on B450. Also, I must confess that if I would have tested those scenarios, I honestly have no idea how to put that much information into readable graphs.

Anyway, I hope you will all agree when I say that Ryzen 9 3900X tested on MSI MEG X570 Godlike, and Ryzen 5 tested on B450 make much more sense than the other way around. However, you will probably wonder why I chose Ryzen 5 3600X instead of Ryzen 5 3600. Well, the answer is pretty simple. Even if I know that most of you will opt for the slightly cheaper 3600, I only had that CPU for a few days, where as the Ryzen 5 3600X I have from AMD has been in my lab since launch, so it is always available for me when I want to do longer tests like this one.

Anyway, right now I see that there is a 39 USD difference between them, besides the 200MHz, so they are as close as they get. Now, testing a 239 USD CPU, what motherboard should I choose? Well, certainly not the 699 USD Godlike, which is much more suited for the high-end Ryzen 9 3900X. No, this time I chose an affordable B450 motherboard, but one that is fully prepared for the new Ryzen 3000 series. I am talking about MSI B450 Tomahawk MAX, which retails right now for ~143 USD, and comes equipped with a 32MB BIOS chip that allows support for all AM4 processors supported by the chipset.

I chose the MSI B450 Tomahawk MAX motherboard because I wanted the BIOS to be as close to the one we used so far (also MSI), so we can eliminate the minor differences that might occur between various motherboard vendors. For these tests, I used the latest BIOS available when I started testing, which is 7C02v33 from September 18, which brings support for AMD ComboPI1.0.0.3ABBA.

Besides the motherboard (MSI B450 Tomahawk MAX) and the CPU (AMD Ryzen 5 3600X), the only other part that was different from our previous studies was the cooler, in this case the AMD Wraith Prism that comes bundled with Ryzen 9 3900X. All the other components used were identical, meaning a Seasonic P1200 power supply, the Nvidia GeForce RTX 2080 Ti video-card and the same 1TB Samsung 970PRO SSD together with the same version of Windows we used before.

Of course, the tests were done on Windows 10 Pro x64, with all the updates (in this case the 1903 version). The system was tested on the HSPC Top Deck Station test table, with an ambient temperature of around 28 oC. For each RAM kit / configuration used, I also included 2 BIOS screenshots with the settings I used for the DDR4 3800 1:1 Tweaked configuration, if that was possible, which, in most cases, offers the best performance for each kit. 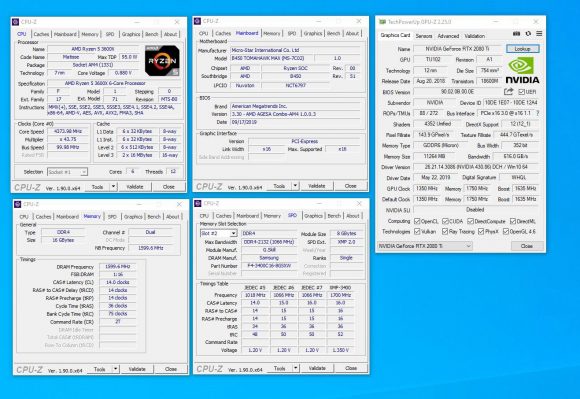