PAGE GUIDE FOR THE MOBILE READERS

7.07.2019 is a date that will definitely be remembered by PC enthusiasts all over the world, with AMD rising back to the challenge one more time, in what can be considered without a doubt the most important hardware launch of the year – the launch of the AMD Ryzen 3000 series, based on the Zen 2 architecture, code name Matisse. And here, at LAB501, we have covered all the important aspects, analyzing the architecture, the performance of the Ryzen 7 & Ryzen 9 CPU’s, and some of the most interesting X570 motherboards that made it to our laboratory.

In the last 10 days, we have analyzed CPU performance, PCI-E Gen 4 storage solutions, and a plethora of motherboards, and soon we will test more affordable processors. And yet … it felt like something was missing… Something important, which has a direct impact on how the new platform behaves. I am talking about RAM, a crucial element in achieving high performance on a Ryzen platform.

You see, this time AMD has introduced something new to the game, namely the ability to use memory asynchronously to the memory controller, which allows us to get much higher frequencies for the memory. And this brings back an age old question, which everybody is familiar with – what do we choose? Higher clocks with loose timings, or lower clocks with tighter timings? And I have to admit that is an interesting question, especially as AMD recommends the DDR4 3600 CL16 configuration for an optimal price / performance ratio, and a DDR4 3733 1:1 CL17 configuration for optimal performance.

In order to try and shed some light on this subject, we have chosen 6 memory configurations for which we have run our entire testing methodology, consisting of 15 applications and 10 games, tested in 3 resolutions. But, playing around in the BIOS brought back memories from a time when we did not care too much about games or applications used by professionals. For you see, back in the day, many years ago, before everything else, we were overclockers and we tested RAM with the same dedication as we now test CPU’s and graphic cards.

And even in those long fotgotten times, the question was the same – what do you choose? Frequency or latency? Even now I remember the glory days of the Socket A platform, when Bartons where puting Pentiums to shame and we were using Corsair LLPT RAM, equipped with Winbond BH-5 ICs to achieve the tightest timings possible, like DDR 260 2- 2-2 . And even in those days, people who wanted higher clocks could use kits equipped with Samsung TCCD chips, capable of reaching clock well above 300 MHz. Later on, in the DDR2 era, the legendary Crucial Ballistix were able to reach high clocks, for example 690 MHz 4-4-4-12 , but also very tight timings, like 530 MHz 3-3-3-9 .

Then came the age of DDR3, with the legendary Elpida HYPER ICs, capable of running very tight timings ( 900 MHz 6-6-6-18 ), but also reaching high clocks with the right cooling ( 1377 MHz 8-9-8-24 ). As time went by, the Elpida HYPER ICs were eventually outperformed by newer chips, like PSC, but especially Elpida BDBG and Hynix, which we used 7 years ago to set the DDR3 world record (at the time), 1800 MHz CL10 , as well as a series of results with tighter timings (such as 1637 MHz CL8 ). And what do you know… those results were done on an AMD platform.

The years have passed and we have reached the DDR4 era, where there are currently three major types of ICs, namely Samsung, Micron and Hynix. As we speak, the frequency records are done with kits based on Micron ICs ( 2943 MHz for the Intel platform and 2887 MHz for an AMD platform), but I think there is no secret that all the high-end RAM kits, which allow both high clocks and tight timings, are based on Samsung B-Die ICs. These are, in fact, the kits that work best with the X570 platform, so we used such a kit to see how clocks and timings have an effect on Zen 2 performance. Because, after all these years, we are still RAM guys. 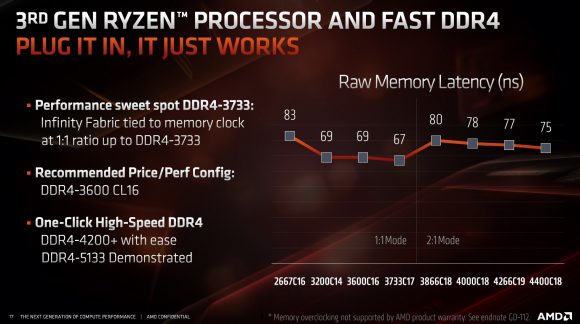